Off we trotted to Chewton Glen to stay in one of their double-decker tree houses. Because why not?

I generally refuse to travel with Sam because his crappy sleeping is ten times worse in a strange bed, but this was no house party where I would be expected to perform and conform. This was a hotel in which I was allowed to slob about doing whatever I liked. In a treehouse! In the main house there was a kids club! Sold to the sweaty ginger lady in the back.

The tree houses are like orbs on stilts, set away from the main hotel in woodland. There are six in all, divided into two apartments. The effect is a bit like a convention centre for Bond baddies. And I mean that in a nice way.

Sam utterly humiliated me by refusing to go IN the buggy, so we both had to ride in the luggage rack. Hotel staff and guests alike looked on aghast. 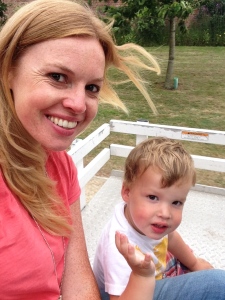 Our treehouse was on two levels, the kids little loft room accessed by a vertical set of steps (complete with child-gate) with a terrific library of books and boardgames (which the kids eviscerated in minutes) in between treads.

Another marvellous thing about Chewton Glen was the communal kids tea, served at 6pm sharp, which comes in the form of a buffet. Nothing worse than arriving at a dining room with hungry and fidgety children only to have to pick something off the menu which will arrive in a portion, twenty minutes’ hence, which is enough to feed fifteen soldiers recently back from manoeuvres. You will then eat most of and not want your posh dinner two hours later.

Here, fish fingers, chips, pasta and the best shepherd’s pie I’ve ever had, sat under heated silver domes. There were even profiteroles! Oh my days.

Once we had got bored with running in and out off the balcony, going up and down the ladder stairs and hiding in the huge curtains – and the kids were bored of doing it, too – there was the magnificent and well-staffed kids club: 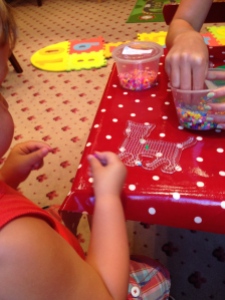 two excellent swimming pools, indoor or outdoor – both heated – with generous kids swimming times (in the outdoor pool, kids can swim all day).

The beach is also a twenty minute walk or five minute drive away (no prizes for guessing how the Corens got there… poop poop!). We had a sunny day, so it was totally brilliant, magical and dreamy. Probably dreadful as soon as the clouds gathered, but that’s England for you. 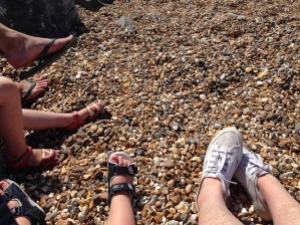 Sam’s fat little feet in his action sandals make me want to die.

Other brilliant things about the treehouse include a little hatch into which your treehouse food hampers are slid, so as you blearily stagger about at 7am after a night being woken up every 1.5hrs by your son’s thrashing about and midnight/dawn whimperings you don’t have to sulkily face a smart room service waiter but only open your hatch and find your breakfast there, ready to go.

The breakfast hampers change every day, so one day we got a plateful of waffles!! It was genuinely exciting opening the box to see what was in there We toasted the waffles in our little toaster and then spread with butter and maple syrup! (Next post: dieting tips. 1. Don’t eat the free waffles.)

The breakfast hamper was otherwise also lavish: different boxes of cereal, mini pastries, a whole french stick, little whatsits of nutella, cheese and charcuterie, fruit salad. I’m still eating most of it now at 10pm in London having driven back this lunchtime.

I give this hotel an A minus! The minus for the ever so slightly slow service, but this isn’t a problem if you know and can plan ahead accordingly.

On the subject of travelling with toddlers, my life has been saved many times by these bad boys, Dream Tubes, which if you don’t know already are a sheet with pockets in them for inflatable bed bumpers. They are brilliant if you have a toddler who doesn’t like sleeping in a strange cot (both mine had issues with this) or there is no cot available.

So Sam still might be sleeping badly (the full benefit of his adenoid op will be felt in another weeks’ time, I’m told) but at least he didn’t also have a full-on nervous breakdown about being in a strange cot, too.