I have been searching for WEEKS for a good Fairisle sweater with very little success. I think perhaps I have “gone” a bit early – Fairisle maybe doesn’t hit the shops until mid-October or early November as people start to think about Christmas.

Still, I’ve been looking because I’ve got a terrible fear of all the marvellous cosy Fairisle sweaters selling out and I want one.

But so far the two likely sweaters I’ve found and bought and had delivered have been rotten. One from Boden, which was bulky and itchy and !!!! so fucking static !!!!!

and another I found on ShopBop, which arrived today, which is also itchy and a bit stinky like of wet wool/dogs. They both have sleeves that seem to balloon out from the shoulder and flap around one’s elbows and forearms. So disappointing.

I sent the Boden sweater back and the above sweater is going back, too. Because that’s the thing about internet shopping, you have to be absolutely 100% okay with the slight hassle of sending things back. Luckily I live near a Mailboxes Etc, which is always empty and queue-less, unlike any PostOffice, which has queues like something out of the Soviet Union circa 1985.

You have to be ruthless with internet purchases. Absolutely ruthless. I reckon a lot of online places make a huge margin off their customers not being arsed to send things back. You have to try the thing on assuming it’s going to be shit and you have to send it back – this requires a pretty huge doublethink, as the item in question, in the time between you hitting “Place Order” drunkenly and it arriving at your door, will have verily become the item that is going to change your life.

Then it arrives and smells of wet dog and you’re so disappointed you could cry and you think… maybe if I put it in a drawer and try it on again later it won’t be so stinky and itchy. Wrong my friend. Wrong. Put it back in its bag and send it the hell back to wherever it came from.

You have to think “I knew it. I knew it was going to be shit” and take great pleasure in sending it back because the shop is probably counting on you not doing so.

Anyway I’ve completely given up on the hunt for a Fair Isle sweater now. I found this on on Gundrun (who made Sarah Lund’s sweaters) but it’s insanely expensive and I just know it’s going to be some itchy unflattering bastard. 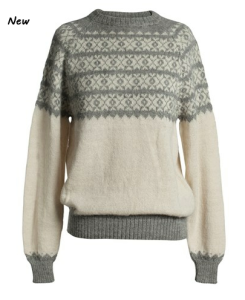 Anyway I’m completely fed up now. I’ll just wait until there are 4,000 snowflake sweaters in Gap and have to make do with one of those.

« Please will someone….
The bag that took over the world »