Ever since meeting a billionaire’s wife who only ever wore black when she went out at night, I swore to do the same thing. I’ve been doing this for getting on for two years now and it works an absolute treat. Sure, she’s wearing Dior and I’m wearing Comptoir Des Cotonniers, but who cares.

A lot of people feel bad about wearing black, just generally. They think it’s boring, or it’s cheating or it’s funereal or something. And to those people I say: knock yourself out. Wear as much colour as you want! Twist yourself up in knots about whether or not this goes with that. I’ve been ready for ages – I’ll meet you at the bar.

But if you don’t care, if you just want to be able to get dressed to go out without thinking about it, if you don’t want to risk ever turning up and looking wrong or out of place, just only ever wear black.

I have got three black dresses, two pairs of black trousers, a black jacket, a black shirt and some black sweaters and – for going out at night at least – that’s it. Those are my options and it’s very relaxing.

“I always wear the same thing at night,” I will say at dinner when the conversation comes round to clothes.

“No you don’t,” says everyone. “Yes I do,” I say calmly. “You just don’t notice, because that’s the way it is. Because it basically doesn’t matter what you’re wearing, as long as it’s black.”

“But you don’t,” they will insist, getting a bit angry now – you can’t always wear the same thing, that’s not… possible! It’s not… feasible! If you wear the same thing every time you go out then what’s the point?! Is anyone noticing what they are wearing? (Answer: Only if you look awful!)

Magazines and newspapers do not suggest that you wear black when you go out because black looks bad in photos. Look:

This is a probably very nice dress, from Zara. It is perky and playful with little frills down the front and a pie-crust collar. I am seriously considering adding this to my stable of black party dresses. But in the photo, it looks awful, you can’t see where it starts or ends or anything. So black is a hard “sell” on the page and when fashion editors want to put together a shoot, they don’t want to feature a lot of black dresses. But I’m telling you, if you find it tricky to get dressed for an evening out, especially if you have got small children – just wear black.

I accessorise, obviously. With gold! Anything, as long as it’s gold. Gold is my One Colourful Thing at night. If you see a woman in Soho past 7pm, being knocked down at a zebra crossing and she’s wearing a lot of black and gold, call my husband because it’s ME!

I also came across just now, also in Zara, this very nice clutch, which would nicely update my all-black evening wardrobe: I am channelling Jo Elvin’s Ox Blood pantsuit (but only a bit). 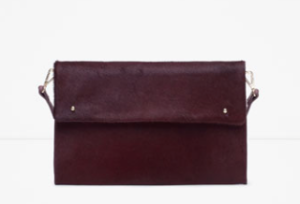